Remember God’s Promises and Press On 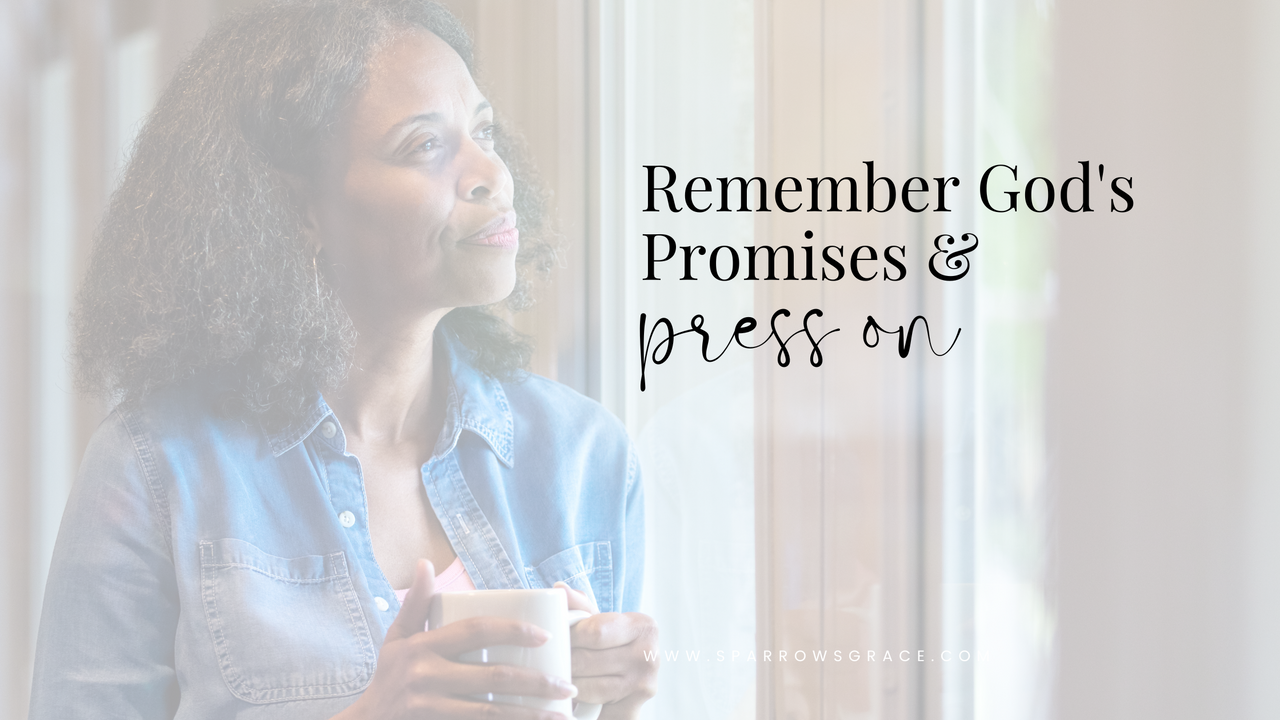 However, many meaningful things in life take time.

When I met my husband, I knew right away we were meant to be, but we remained just friends for eleven long months before he realized I was the one for him. As a newlywed, I wanted to bear a child, but I suffered an early miscarriage during my first pregnancy. Later, I waited several fatigue-filled years for both of my two sons to sleep through the night and be potty trained.

More recently, I was diagnosed with one more autoimmune illness (I now have two). I spend a lot of time waiting at doctors’ appointments, waiting in line to pick up medicines, and waiting to plan anything until I know how I’ll feel that day—all so I can better give my body the rest and care it needs to function best. Sometimes, I don’t want to endure any more waiting, or press on to see what God has for me. I just want things to be easier.

While some days I get frustrated about my “lot” in life, I’ve also found that God has used these waiting times and seasons to teach me about Himself and reveal areas where He needed to work on my character, instead of giving me what I thought would make me comfortable and content.

Like the good Father He is, God has patiently and tenderly carved away my pride, self-sufficiency, selfishness, and tendency to drive instead of allowing Him to lead.

Like many biblical figures, Sarah waited–not for minutes or months, but for decades to see God’s promise fulfilled. As she waited for a son in her old age, and ultimately, descendants too numerous to count, she became frustrated and took matters into her own hands. She gave her maidservant Hagar to her husband Abraham to sleep with, intending to shortcut God’s process.

Thankfully, our Heavenly Father didn’t decide to cancel His promise to Sarah because of willfulness. He still made Sarah the mother of Isaac and the Israelites, and she’s even mentioned in the “Faith Hall of Fame” in Hebrews 11.

Aren’t you glad He hasn’t cancelled His promises to us because of our weaknesses and sins?

Every day we choose to turn the reins of our life over to Him in surrender, He gives us endurance, strength, patience, hope—and much, much more. We can hold onto His unfailing promises and unchanging character during our hardest days, knowing that He will give us exactly what we need to be faithful and become more like Him.

Friends, here’s what I’ve found to be true in my fifty-plus years on the planet: God is incredibly gracious as we grow in trusting Him. He will not let our human tendencies get in the way of His wonderful plans for us. And at the end of it all, He will welcome us into eternity, smiling at all He’s done in our lives because we endured with Him.

Author bio: Dena Dyer loves Jesus, her family, all things literary, coffee, and British television. She’s a speaker, Bible teacher, and author of eleven books, including the award-winning Wounded Women of the Bible: Finding Hope when Life Hurts. Dena has been married to her hubby Carey for 25 wonderful years (and a couple they don’t talk about). Her passion is sharing words of humor and hope with weary people, and she enjoys singing on the praise team at the church where her husband is the worship pastor. She spends too much time online or in the fast food drive-through--but she and the Lord are working on it. Connect with her: website, Instagram or Facebook. 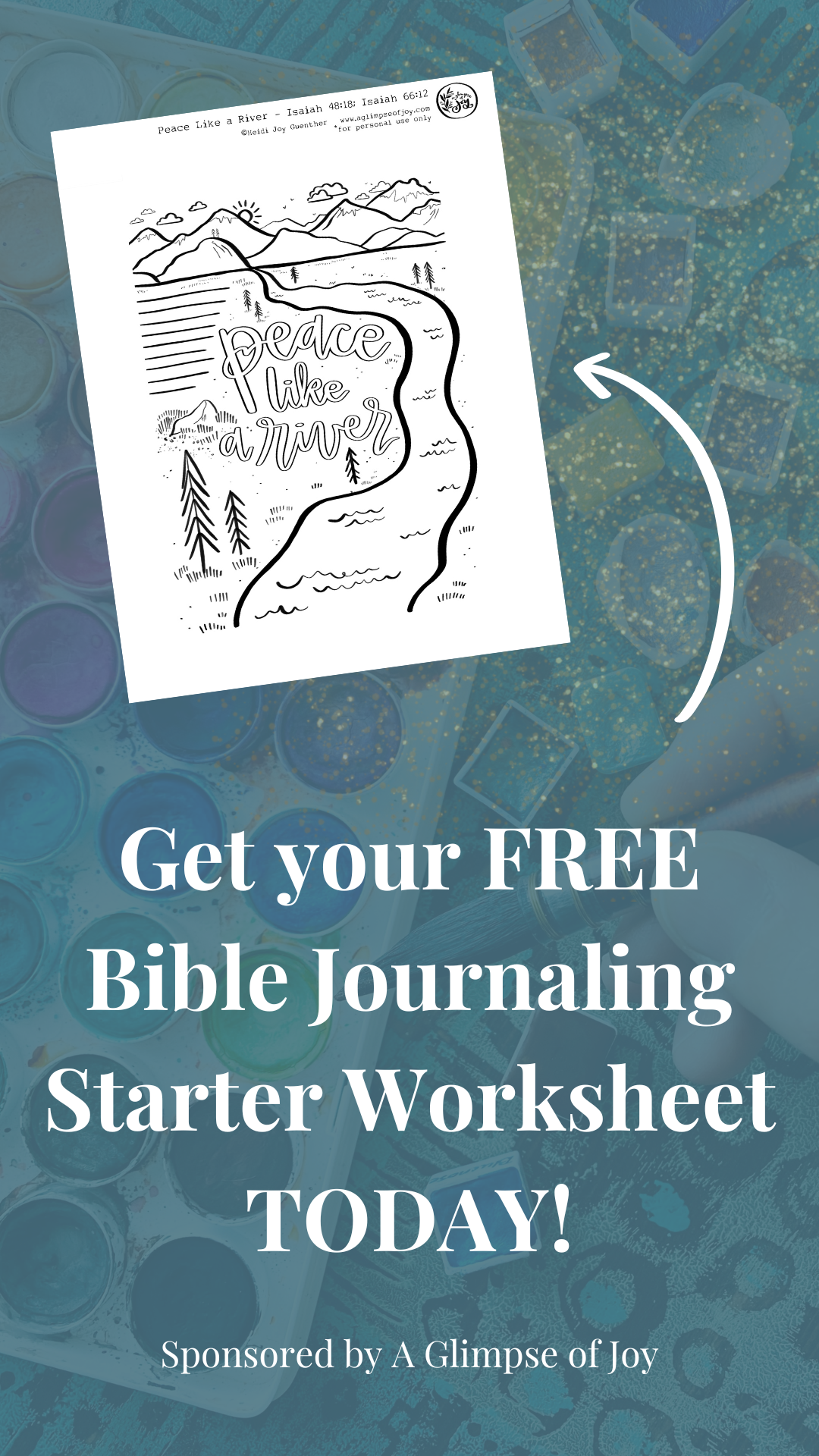 Pressing on when you can't see the forest for the trees
Take A Breath and Press on!
Growth Helps Us Press On

Looking for worship music to keep you centered throughout the week?

Go here to play the one you need in this season 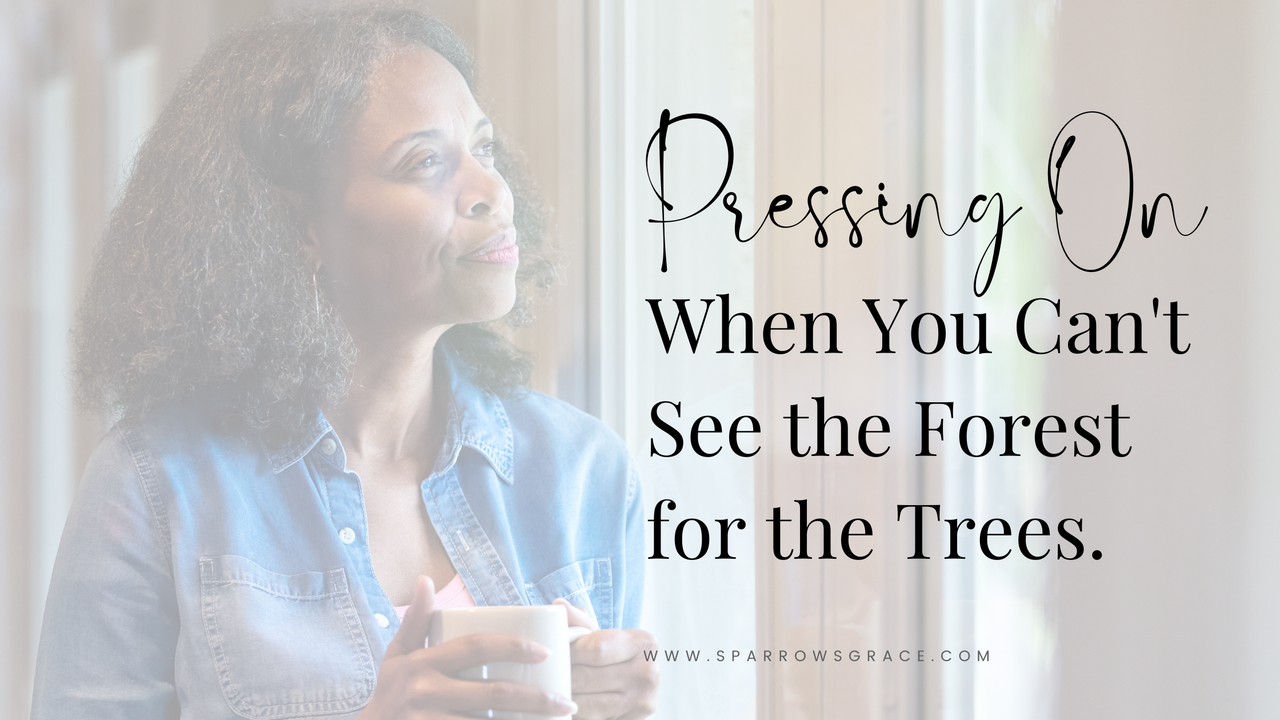 Pressing on when you can't see the forest for the trees 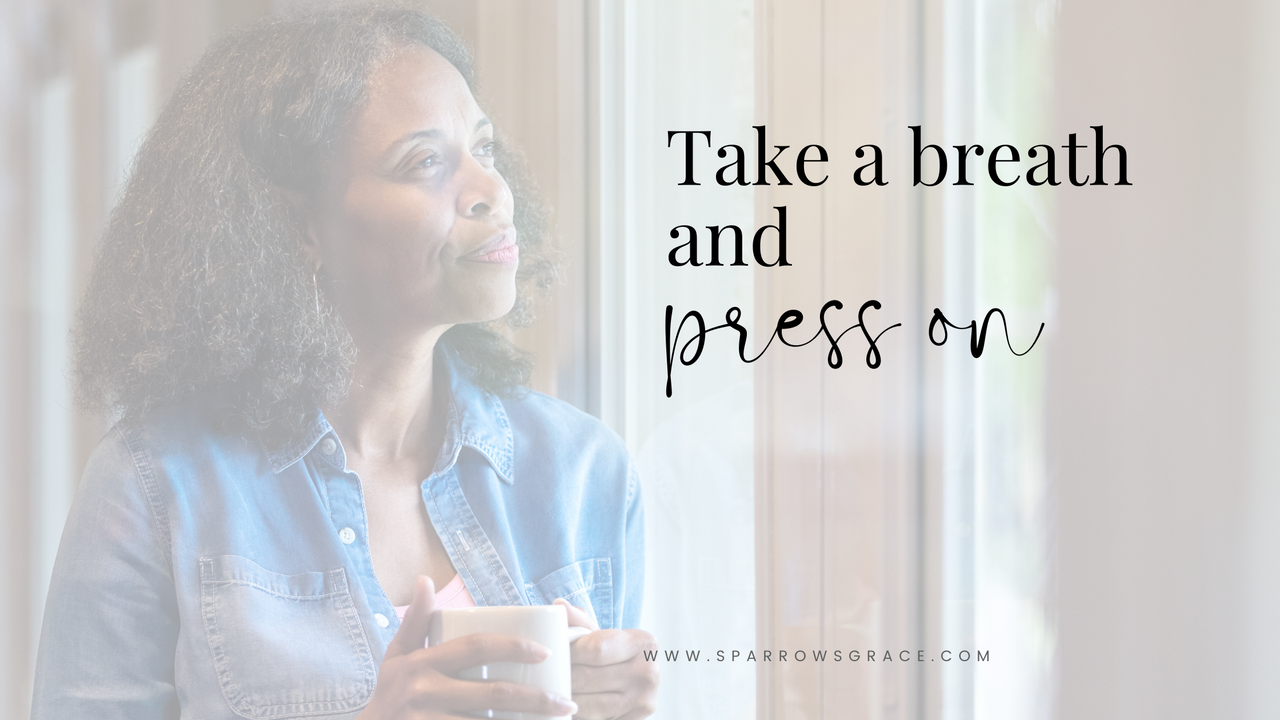 Take A Breath and Press on! 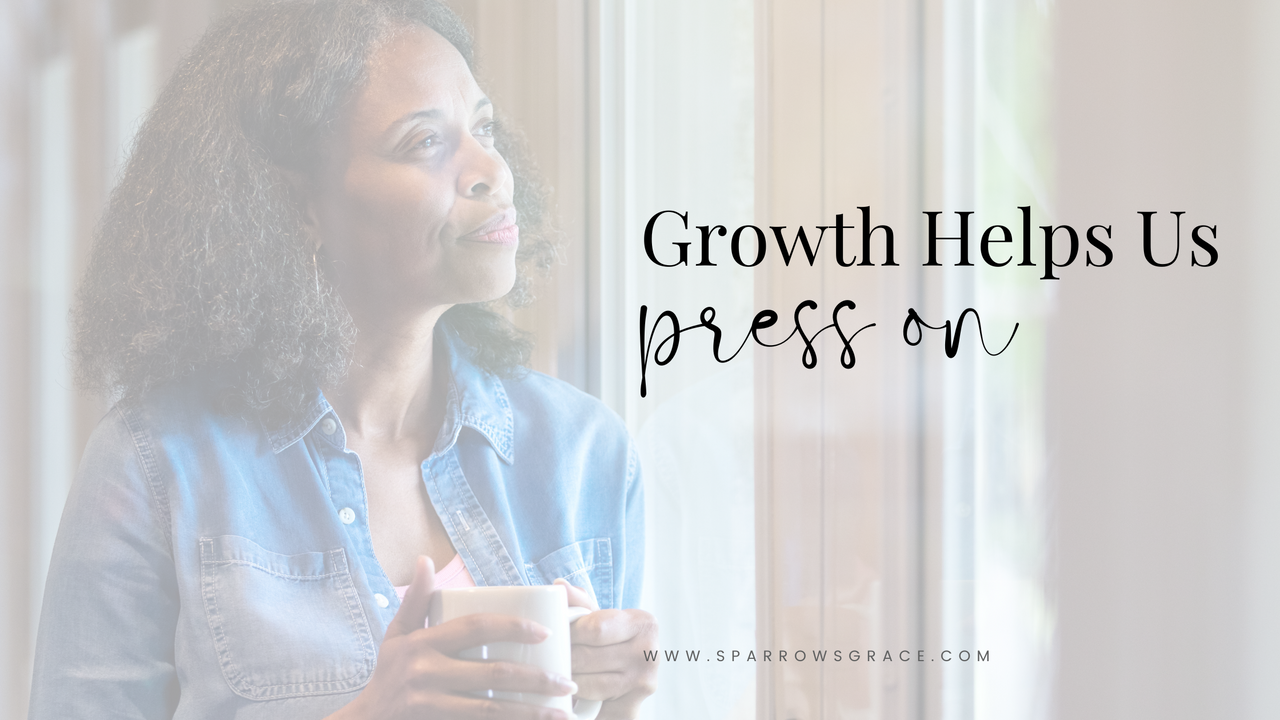 Growth Helps Us Press On 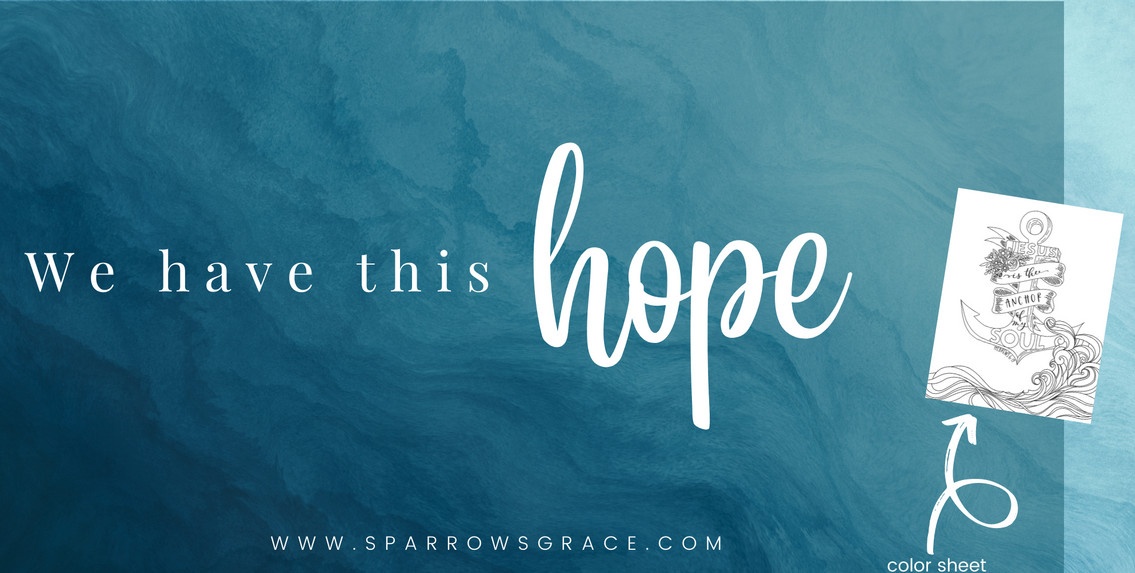 And enjoy meditating on this month scripture as you create.

By submittting this info you will be joining the Sparrows Grace Marketplace email list.